Surviving cancer | Monica Kyotazala has lived with a life-threatening disease for 12 years.

In 2006, she was diagnosed with cervical cancer, and her body shows the physical ravages of the condition.

Painfully thin and with a faltering voice, she explains how she went without adequate medical treatment for close to two years, after Uganda’s only radiotherapy machine broke down.

After the machine failed, doctors prescribed two doses of chemotherapy for Ms Kyotazala.

“I didn’t have the money,” she says, beginning to cry. “I spent a month without getting the treatment. My children were trying to raise the money. So I survived on just morphine, for the pain. I had to go back home and wait.”

For Ms Kyotazala, and patients like her, the wait is finally over.

Its predecessor failed in April 2016, after 21 years in operation.

Some got worse, and died. 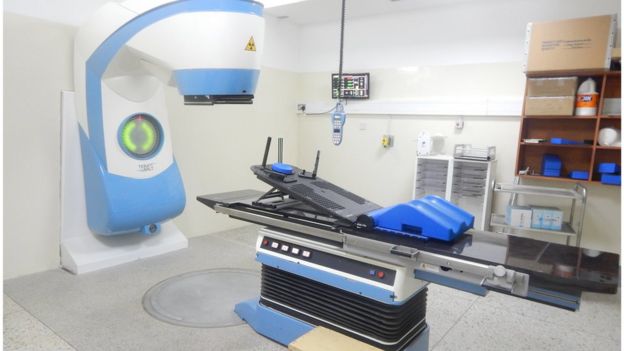 The arrival of the new machine is potentially life-saving, even if it remains the only one for a country of more than 40 million people.

Ms Kyotazala has already had 15 back-to-back sessions in the new device, treatment that requires her to make a 120-km (75-mile) journey from her village in Iganga, eastern Uganda, to the country’s capital, Kampala.

She says she is finally hopeful of making a recovery.

At the Uganda Cancer Institute at the Mulago National Referral Hospital, radiotherapy is free, but chemotherapy and other cancer treatments are not.

The cheapest dose of chemotherapy costs around 300,000 Uganda shillings ($85; £60). More expensive treatments cost as much as 1m shillings ($280; £205), says Rose Kiwanuka, head of the Palliative Care Association of Uganda.

“Sometimes patients cannot even find all the doses prescribed at the national hospital,” she adds. “They would have to buy them from private pharmacies, if they are in stock, and then bring the drugs to the doctors. That just goes to show the need for radiotherapy.” 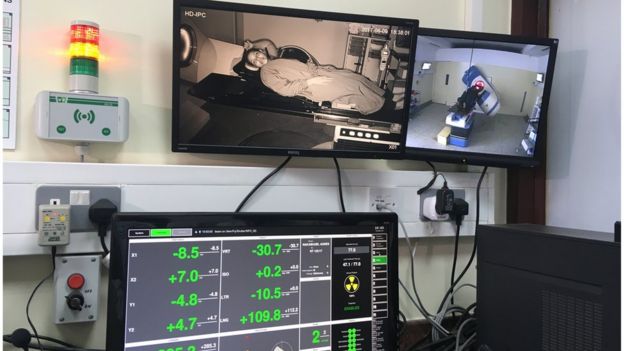 The Uganda Cancer Institute is hailed as a centre of excellence across the region and receives about 7,000 new patients every year, and close to 37,000 return visits. Its patients come from Uganda, the Democratic Republic of Congo, South Sudan, Burundi, and even some parts of Kenya and Tanzania.

About three-quarters of all new cases would require radiotherapy.

In the waiting area at the radiography department, expectant patients fill the room. It is 05:00 GMT, but there are already around 100 people sitting on long benches in a queue for treatment.

In a small room to the left, the new machine gleams in the dim light.

The radiography staff are preparing a patient with breast cancer, aligning the part of the machine that discharges radiation to one area of her chest.

“We are able to turn the machine in any direction, to focus on the area we want to treat,” says radiotherapist Everest Katungwesi. 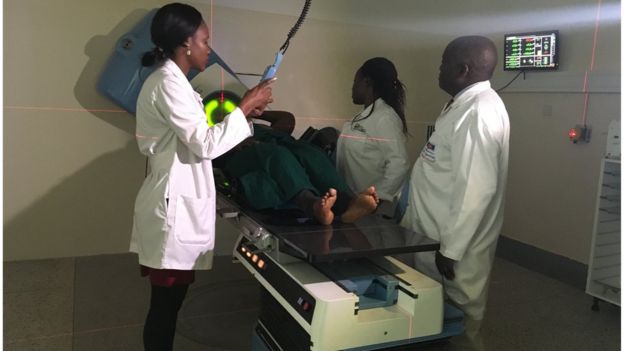 When all is ready, we step out to watch from a screen in the monitoring room. It displays the image of the patient, as well as details of the time it will take for her dose to be administered.

“You see? Just 77 seconds. This is amazing. These sessions used to take minutes to complete,” Mr Katungwesi says.

Surviving cancer | Do the maths

But the new machine isn’t enough.

“Globally, in the best-case scenario, for every 250,000 people you should have one radiotherapy machine,” says Dr Jackson Orem, a senior oncologist and director of the Uganda Cancer Institute.

He says that even having one machine for 500,000, or one million, people would help.

Uganda, which has a population of more than 40 million, is a long way from that.

But Dr Orem is confident that Uganda’s cancer care provision will improve.

“This crisis that we have just come through has helped us to come up with strategies,” he says.

“In less than a year, we are likely to have an upgraded machine called a linear accelerator. And that is going to be one of four others that we are going to acquire.

“So I think the crisis has brought with it what I would call a silver lining to a dark cloud.”

It’s a long way off from one machine for every 250,000 people, but for patients like Ms Kyotazala this could be the difference between life and death.

Cancers among children in Ghana

Three in five babies not breastfed in first hour of life...

Stillbirth linked to sleeping on your back