paracetamol and ibuprofen alternate | Young children suffering from fever get better faster when given ibuprofen rather than paracetamol, say researchers.

Those needing treatment over 24 hours can safely take both painkillers, which could reduce the period of illness by more than four hours.

The study, the first to show that ibuprofen and paracetamol can be taken alternately safely, is likely to throw parents into confusion about the best way to treat their sick children.

Traditionally parents have tended to prefer paracetamol to quell fever symptoms, and it is contained in many over-the-counter products for babies and pre-school children.

However, specific advice not to mix paracetamol and ibuprofen came in guidelines issued last year by the National Institute of Health and Clinical Excellence.

These say either drug may be used to help children who are distressed or unwell, but they should not be given alternately because of a lack of evidence about whether it is safe.

Advice from NHS Direct, which is often the first port of call for anxious parents, also says the two drugs cannot be given alternately to babies and children.

The drugs work in different but complementary ways.

Ibuprofen blocks the production of various chemicals in the body which come in response to injury or disease and cause inflammation.

Paracetamol blocks a different enzyme in the brain and spinal cord involved in the transmission of pain.

Around 70 per cent of young children are affected by fever each year. Although most fevers will settle by themselves, a few are caused by serious infections such as meningitis or pneumonia.

The study, published today online in the British Medical Journal, involved 156 children aged between six months and five years who had fever. They were divided into three groups.

Dr Alastair Hay, consultant senior lecturer in primary health care at the University of Bristol, who led the study, warned that parents should not combine liquid paracetamol and ibuprofen in one solution.

He said the medicines should be given separately but they could be administered straight after each other.

‘In the first four hours ibuprofen is better than paracetamol,’ he said.

‘After that if a child needs two medicines it is safe to use them in this way.

‘Ibuprofen seems to have a longer duration of action so it seems to be more powerful.’

The main difficulty with alternating medicines was the danger of overdose, with 31 children in the study receiving an extra dose of medication, although none had any adverse effects.

Not all children with fever needed medicines, he said, it was for parents to judge how unwell they were or to seek advice when worried.

Dr Hay said NICE should take into account the study findings when it conducts a routine three-yearly review of latest research.

A spokesman for NICE said the 2007 guidance helped health professionals to identify high-risk symptoms in children with fever.

‘It recommended more research on the effectiveness and safety of alternating doses of paracetamol and ibuprofen in reducing fever in children who remain febrile after the first fever-reducing medicine,’ she said.

‘Any newly-published research will need to be thoroughly assessed by independent experts.’ 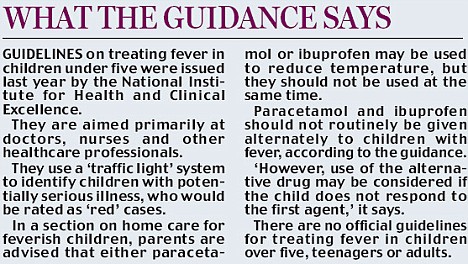 For many years GPs have been advising parents to use a combination of paracetamol and ibuprofen for treating a child’s high fever.

This goes against the current stern warning from NICE that parents should give their children only one medicine.

But as many families will know, when you’ve got a child with a high temperature, or blisteringly painful earache, sometimes paracetamol is not enough.

For this reason, some parents prefer using ibuprofen, which is certainly a better painkiller, and is as good at reducing a fever.

But even better is to give the child both drugs; the medicines complement each other – they work on different parts of the brain – with great effect.

Now we’ve had official sanction for our ‘renegade’ advice; a study published on the British Medical Journal’s website has found that the combined used of paracetamol and ibuprofen reduces fever more quickly.

Quite rightly, the doctors who led the study have called for a change in official guidelines to reflect the findings.

The question is whether NICE will act fast enough on this one –on previous form, one suspects not.

Until it does, my suggestion is that parents consider alternating the drugs for best effect.

Each takes about a half an hour to ‘kick in’, and then starts to wear off after a couple of hours – so start with ibuprofen, which the study shows is the best to give first, followed two hours later by paracetamol, then two hours after that, the ibuprofen again.

Some fevers and pain won’t need this double hit treatment –you have to use your parental instinct on this, but stick carefully to the dosage on the label. (And to make sure you do alternate the drugs, consider putting the next drug to use on the shelf in front of the one you’ve just given).

Do you need to stick to child formulations? In theory, you can give a child a reduced dose of an adult medicine, such as a painkiller.

After all, this is what happens in hospital.

However, hospital doctors make very precise calculations on the dosage according to the child’s weight, and for any parent to do this could be extremely dangerous.

The best advice is to stick to child formulations and always read the label carefully for the correct dose.

And remember, babies under three months should not be given either paracetamol or ibuprofen.

Dr Scurr is one of the country’s leading GPs. He answers your questions on health every Tuesday in the Mail’s Good Health.

Christmas food and drink – be careful how you eat

How much sleep do babies and toddlers need?

HIV and Hepatitis B dilemma

Surgery death ‘Twice as many die’ in Africa

Health Benefits of Avocado that you should know